Ana Sayfa » Yayıncılar » PICADOR » King of the World: Muhammad Ali and the Rise of an American Hero 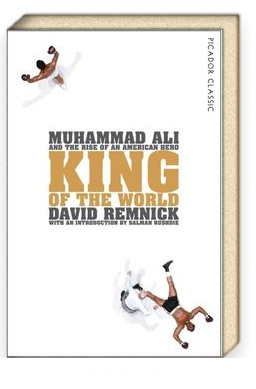 King of the World: Muhammad Ali and the Rise of an American Hero

David Remnick
|
PICADOR
With an introduction by Salman Rushdie

It was the night of February 25, 1964. A cloud of cigar smoke drifted through the ring lights. Cassius Clay threw punches into the gray floating haze and waited for the bell.

When Cassius Clay burst onto the sports scene in the 1950s, he broke the mould. He changed the world of sports and went on to change the world itself: from his early fights as Cassius Clay, the young, wiry man from Louisville, unwilling to play the noble and grateful warrior in a white world, to becoming Muhammad Ali, the voice of black America and the most recognised face on the planet.

King of the World is the story of an incredible rise to power, a book of battles fought inside the ring and out. With grace and power, Pulitzer Prize-winning writer David Remnick tells of a transcendent athlete and entertainer, a rapper before rap was born. Ali was a mirror of his era, a dynamic figure in the racial and cultural clashes of his time and King of the World is a classic piece of non-fiction and a book worthy of America's most dynamic modern hero.