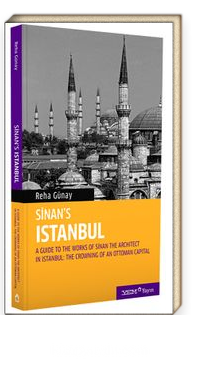 Reha Günay
|
YEM YAYINLARI
In the 16th century, the Ottoman Empire was a world leading political power. It was also at the peak of its artistic production. Within this context, Sinan was able to embody alone the cultural heritage of his time in the field of architecture. Sinan’s Works constitute the crowning of Ottoman architecture, and his contribution to our architectural history is incomparable. A majority of his unique designs were implemented in Istanbul.
Sinan’s Istanbul was designed as a comprehensive guide for those who would like to learn about the works of Sinan in Istanbul. In this book, for which he, photographed and studied each and every work on site and in detail, Reha Günay, describes with the help of architectural drawings the basic characteristics of Sinan’s different types of works: complexes (külliye), mosques, baths (hamam), Islamic higher education schools (medrese) and bridges.

The book divides the city of Istanbul into six areas, according to a visit course which begins at the centre of the Historical Peninsula. It includes the following districts: “Sarayburnu-Süleymaniye”, “Eyüp-Sütlüce-Cibali-Edirnekapı”, “Topkapı-Saraçhane-Fatih”, “Yedikule-Aksaray-Fındıkzade”, “Şişhane-Tophane-Tepebaşı-Ortaköy” and “Üsküdar” as the main areas which also form the main chapters of the book. Each chapter has an introduction in which maps help the reader understand the position of the works and the spatial relation between them.