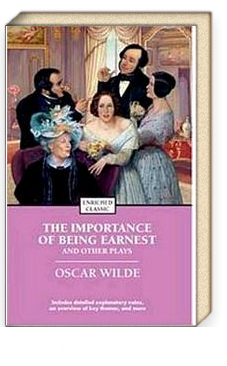 The Importance of Being Earnest and Other Plays

Oscar Wilde
|
ENRICHED CLASSICS
IOscar Wilde’s genius was such that he created masterpieces in every literary form he attempted, whether it be plays, fiction, essays, or poetry.

Among his plays, The Importance of Being Earnest—the last he wrote—is certainly the most celebrated. H. G. Wells and George Bernard Shaw thought it one of the funniest plays ever written, and it has continued to amuse theatergoers the world over for more than a century. The play pokes fun at the aristocracy, the literary world, and British manners and customs, while calling into question the very notion of “identity.” The characters’ plans are constantly sent topsy-turvy by unexpected turns of events. Along the way, Wilde’s wit-sharpened dialogue skewers nearly everyone, throwing into high relief the strains of class pretension, social ambition, and romantic gamesmanship.